North Devon is most well-known for the miles of glorious sandy beaches, elegant countryside views and laid back fishing villages. The easy going pace makes for the ideal holiday atmosphere.

It just goes to show that North Devon is understandably one of the UK’s most popular holiday destinations. But some things are a little less obvious. Take a look at these 8 interesting facts about North Devon and the surrounding area…


At the peak of Lantern Hill in Ilfracombe is St Nicholas’ Chapel, allegedly the UK’s oldest working lighthouse, built in 1361! The building and its beacon have stood for over 650 years!


The Bristol Channel separates South Wales from North Devon. It is placed second on the planet for the title of highest and lowest tides (second only to the Bay of Fundy in Canada), meaning that North Devon’s tidal range is among the largest! Records show that the biggest range is an enormous 45ft!


Westward Ho! is the only place in the country (and one of only two in the world) that uses an exclamation mark in its name. It is also the only town in the UK named after a novel. Charles Kingsley, best known now for The Water Babies, published the novel Westward Ho! in 1855.


Braunton Burrows is the largest sand dune system in Britain and has an amazing range of plants (over 400 species recorded!) and wildlife. Its unique biodiversity recognises it as both a National Nature Reserve and as a UNESCO biosphere reserve, giving it a world-class status!


Exmoor National Park is a unique landscape of moorland, woodland, valleys and farmland. As well as some breath-taking scenery, Exmoor has the largest concentration of Red Deer in England and the highest coastal cliffs in England. Great Hangman Cliff near Combe Martin Bay is 800ft/244m high!


The Devon 'Witches' were the last witches to be hung as punishment in Great Britain. Three women from Bideford had allegedly used witchcraft and were executed in Exeter in 1682!


Christian the lion, famous from the story ‘A Lion Called Christian’, was born in Ilfracombe Zoo on 12th August 1969 and was shortly afterwards purchased by Australian John Rendall and Ace Bourke from the Harrods store of London. Eventually, Christian was reintroduced to the wild in Africa. A year later his previous owners decided to go looking for him to see whether Christian would remember them. He did, along with two lionesses who accepted them both as well.


The Guinness world record for the world's longest street party is held by the North Devon town of Combe Martin. This was celebrating the Queen's Jubilee in 2002 and the party stretched almost 2 miles through Combe Martin’s famously long High Street. The party had between 5000 and 8000 visitors, 700 tables with bands and bouncy castles.

By Unknown - August 22, 2014
Welcome to Hele Valley Holiday Park's new Blog where you can keep up to date with all our latest info! It's been a busy bank holiday weekend for us all here, but the hard work is worth it when we see the happy smiling faces of the people staying with us.  The weather has been changeable but everyone has still had a lovely time.  The sun is shining on us again today and the Park is looking beautiful as always. We have all had a giggle at the various Ice Bucket challenges for MNDA on Facebook in the the last few days, we can't wait for our staff here to start getting nominations.  As soon as we get some footage, we will post it to this blog, so keep watch! Unfortunately it will be time to say goodbye to our seasonal receptionist Emily at the end of the week, so we wish her all the luck for the future and hope she will pop down to see us from time to time.
Read more 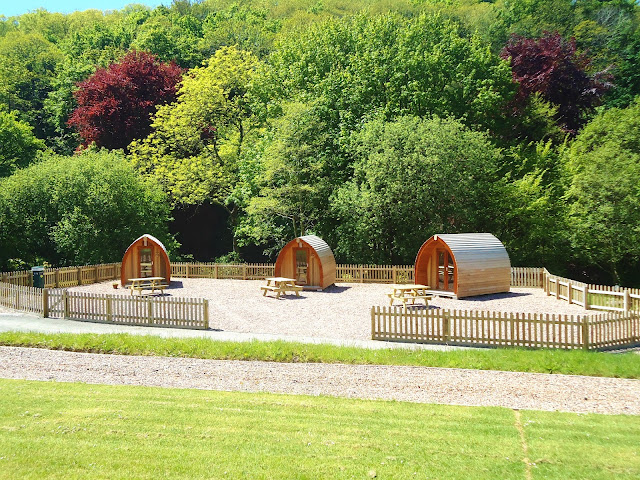 Make the most of your stay in our snug glamping pods Glamping is big news in the staycation world, and if you’re looking to escape the hassle of a tent but still want an affordable holiday, glamping in Devon is perfect. Forget worrying about pegs and getting tangled in ropes, because with our luxury glamping pods at Hele Valley Holiday Park , you can just turn up and feel immediately at home. The Snug Camping Pods and Family Camping Pods are perfect for all seasons, are fully insulated and even each have a little outdoor seating area.  The pods also have their own electricity supply, meaning you can enjoy the great outdoors with a few home comforts to hand. So if you fancy putting the glam back into your camping trips in one of our timber camping pods, here are our top tips for making the most of your UK glamping trip: GLAMPING TIPS Pack blankets. Our luxury glamping pods are snug and cosy, but don’t be mistaken in thinking it’s the same as a hotel room. You’ll
Read more